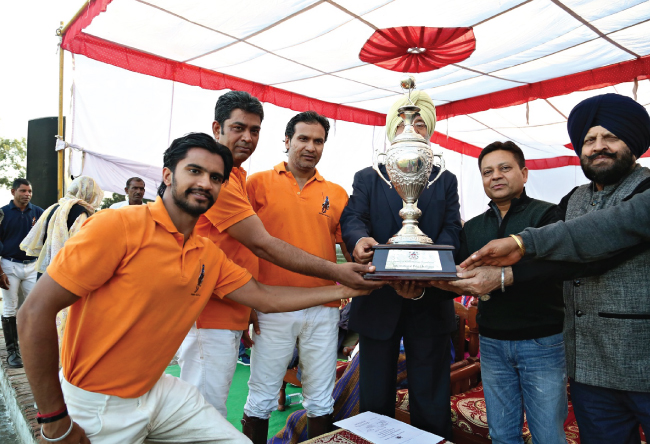 Sodhi Vikram Singh, Managing Trustee of the Anandpur Sahib Heritage Foundation, himself a polo player of international repute, has decided to introduce the sport of horse polo to the annual Holla Mohalla Festival at Sri Anandpur Sahib in collaboration with the Delhi Polo & Riding Club. This will serve to highlight the tradition of horsemanship & bring an international flavour to the vibrant festivities of colour, spirituality and dynamism. The spectacular four-day arena polo tournament was scheduled from 2-6 March 2015 at Sodhi Gurbachan Singh (SGS) Khalsa Senior Secondary School ground, Anandpur Sahib. The Holla Mohalla Festival was established by Guru Gobind Singh Ji (10th Guru of the Sikhs) on 22nd February, 1701. It was meant to be a kind of sports day to determine the military preparedness of the Khalsa Pant (or holy warriors) to fight tyranny & establish a just social order in India. To this day it is celebrated by the Nihang Dals or Holy Warriors who claim their descent from the original regiments of the Guru. The Nihangs still live by the code of warriors of that era. They practice the old martial arts & horsemanship, showcasing their daring skills in sword fighting, tent pegging, archery & other martial skills of that bygone era.
The festival of Holla Mohalla is celebrated to coincide with the festival of Holi. As many as 2-3 million pilgrims & visitors from all over the Punjab & different parts of the country and abroad converge to the holy towns of Kiratpur Sahib & Anandpur Sahib from a week before Holi.