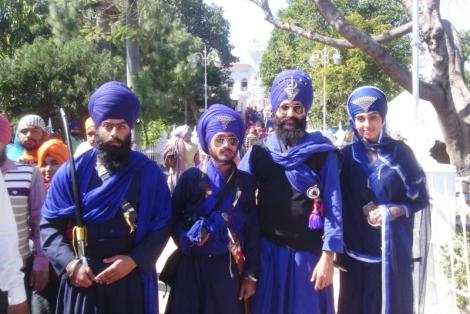 A sky so blue, the breeze so fresh, the smooth road to Anandpur Sahib, it was time for lots of festive colour, a dose of spirituality and langars. It was the holi weekend, the time for hola mohalla, and experiencing the marshal spirit of the Sikhs.

Getting to the City of Bliss

The streets of little town of Anandpur Sahib reverberated with the sound of shabads; trucks and tractors laden with people poured in from all corners of the state of Punjab. Guru kee fauj aka nihangs walked around in their blue dress, weapons and turbans et all, inspired by Shiva’s blue throat, I was told by the Chairman of the Anandpur Sahib Heritage Foundation Sodhi Vikram Singh.

Staying in the more than 350-year-old haveli, I felt blessed by Guru Ramdas. Singh’s family tree comes from the fourth Guru of the Sikhs and he is the 15th generation living in that haveli now. Though people like to see the residence of the guru, it’s only for private use.

The haveli is right near the main gurudwara, Keshgarh Sahib, and around the corner is Sis Ganj Sahib. As you walk around the town, you will see a gurudwara after every few meters.

Elucidating on the history of the city of bliss (literally translated), Singh informed that Keshgarh Sahib is where the Panj Pyaras were baptized by Guru Gobind Singh, the tenth and last guru, on baisakhi of 1699. The khalsa, the pure ones, were born to fight the Mughals and the Tughlaqs.

It is now one of the five main takhts or seats of the Sikhs. Every sunset, the Guru’s weapons are displayed and worshipped here in a special ceremony.

Seeing the natural beauty, the city flourishes on the foothills of the Himalayas as the pure waters of the Sutlej flow through, it’s little wonder that Guru Tegh Bahadur, the ninth guru, chose it as a spot for his prayers. Built in 1665, it has a pace of its own. You can enjoy hot tandoor kee roti which is made in traditional mud tandoors or gobble down yummy pakoras, samosas and jalebi with hot tea.

The main bazaar is just one long street. What I did ignoring the inviting shouts for langars–bought a pair of bright juttis for Rs 150, two colourful dupattas for Rs 100 each. A full Punjabi suit fabric costs around Rs 150. And then walked into a shop, Jaspal di Hatti, where I found wedding jewellery and accessories. The young man, Jaspal, who owns the shop, is also a wedding planner and educated me on Sikh weddings. He also introduced me to the animated movie Char Sahibzaade which is about the martrydom of Guru Gobind Singh’s four children, young lives put to death by the Mughal general Wazir Khan.

Feeling somewhat knowledgeable but a little heavy in the heart, I walked through the green wheat fields towards Lohgarh Sahib which was once the fort where weapons for the khalsa were made. Now it houses a gurudwara. Normally, it’s a quiet place but during hola mohalla it’s filled with groups coming to celebrate the sacrifices of the guru’s army. Along the way were makeshift housing and tents. I also saw palkis with Guru Granth Sahib which is read 24 X7 in these three days.

Sighting a vendor selling sugarcane juice, I took the large glass of the sweet juice, coming right from the fields. Then paying my obeisance to the guru at Lohgarh Sahib, I walked on to the banks of the Sutlej and enjoyed the silence and gentle rhythm of the waters flowing through the green fields. For miles, nothing disturbed. I watched the sun go down and blissfully turned back for langar at Keshgarh Sahib.

Day two, I walked to Virasaat-e-Khalsa, the museum which houses the lives and times of the Sikhs and their history on a beautiful 3D wall. I was surprised to find sensor-driven headphone guides which gave me a dose of the history. It is connected to the large slides on the wall and the moment you stand in front of them, the headphone will tell you all about it. This is available in Hindi, English and Punjabi. There is also a curio shop to buy your mementoes.

Getting around Anandpur Sahib

At Anandpur Sahib everything is best seen on foot, so I headed towards the nahar or canal from where the road goes to Naina Devi. This is one of the 52 shaktipeeths or power spots of the Devi but I have yet to go there. It’s just an hour’s drive, I was told. Bhang plants grow in abundance around Anandpur Sahib and you will find people offering you a glass of this on the streets. But this is only during hola mohalla.

During the two days, I also enjoyed a bout of the traditional wrestling and kabbadi. I watched the competitions being held by a UK-based Sikh sports club at the local school grounds. To encourage international sports, Anandpur Sahib Heritage Foundation holds arena polo matches.

On holi, the hola mohalla festivities ended at Charan Ganga stadium. The different deras begin their processions from Keshgarh Sahib. The palkis with Guru Granth Sahib and the panj pyaras were felicitated, as the nihangs showcased the marshal arts and weapons through the streets. The processions culminated at the stadium with the dal heads arriving on elephants and horses raced through; the crowds cheered as sword fights in groups caught their attention.

The sun had yet to go down, when the blue nihangs and saffron-turbaned crowd proceeded solemnly through the streets, back to their tents. The tractors were laden once again. It was time to head back home. On the way to Delhi we enjoyed a glass of fresh orange juice in the fields. But there is the lure of Naina Devi and more bliss which tugs and says to go back again.

The road from Delhi to Anandpur Sahib is 321 km long and smooth. You have a choice of good dhabas to take a refreshing break at.

There is a train too from Delhi. Or you could take a Volvo to Chandigarh and then hire a car for Anandpur Sahib which is about one hour 30 minutes drive from there. The airport is also at Chandigarh.

Around holi in March as you can experience the hola mohalla. Or anytime around the year.