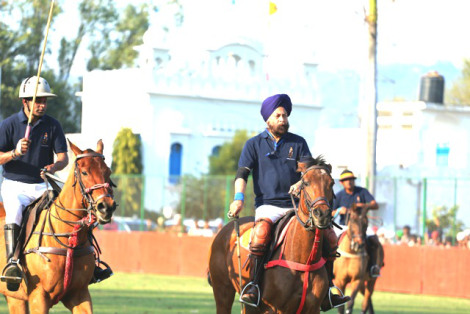 Dressed in the colours of the Nihangs, the second edition of the Sodhi Kishan Singh Memorial Polo Cup was two days of intensive arena polo. Organised by the Anandpur Sahib Heritage Foundation, it was played on the grounds of the Sodhi Gurbachan Singh (SGS) Senior Secondary Khalsa School ground, Anandpur Sahib.

Introduced in 2014 by Sodhi Vikram Singh, Managing Trustee – Anandpur Sahib Heritage Foundation, a polo player of international repute, this has become an annual sport at Holla Mohalla in the holy city. In collaboration with the Delhi Polo & Riding Club, this polo cup is an attempt to bring an international flavour to the city and to promote sports among the youth. Besides arena polo, a format named round robin format with two players in each team was also introduced.

There are four ‘chukkers’ or rounds in the game. Each chukker lasts for seven and a half minutes. And then the horses are changed. Polo originated in the north east state of Manipur and was patronized by the princely states. The British took to polo and gradually it spread to different parts of the world.