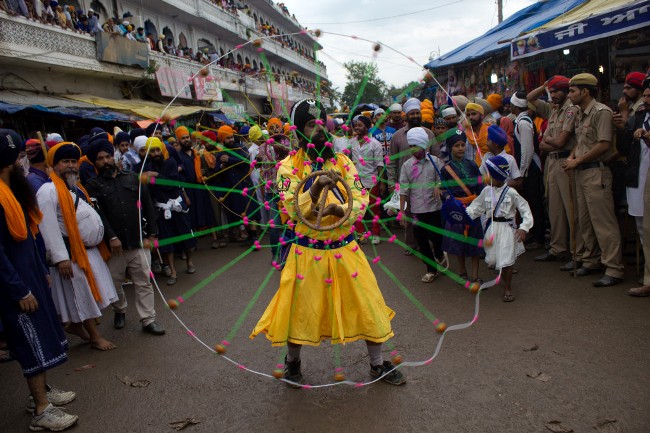 Ambica Gulati witnesses the clanging of swords, crossing of daggers and the bountiful spirit of Sikhs at Anandpur Sahib’s Hola Mohalla festival.

Guru da langar… aayo jee, aayo jee… loudspeakers blared, inviting people to partake in community meals. Hands folded, the hosts—young and old Sikhs—stood in the middle of the road cordially requesting people to eat at their venues. Every nook and corner of Anandpur Sahib, also known as the City of Bliss, had little kitchens bustling with men, women and young ones. They had come from all over the world to celebrate their rich past and feed one and all, preserving the principle of equality.

It was Hola Mohalla, a three-day festival to commemorate the Sikh warriors on the occasion of Holi. Hola is a masculine version of Holi and Mohalla comes from the Arabic root hal (alighting, descending). This Punjabi word means an organised army procession. In 1701, Guru Gobind Singh, the 10th guru of the Sikhs, designated this day for warriors as an occasion to demonstrate their martial skills in simulated battles, fighting Mughal emperor Aurangzeb. 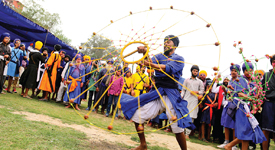 A Nihang displays use of chakra, an ancient weapon 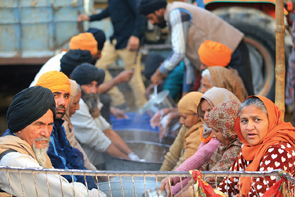 Inside a community kitchen 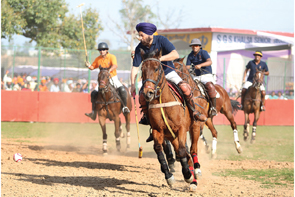 As many as 1 million pilgrims and visitors from all over the world come to the holy towns of Anandpur Sahib and the adjacent Kiratpur Sahib a week before Holi. We saw children running around and shouting, “Guru dee fauj, karegi mauj (Guru’s army will have a good time)”, and youngsters rode on bikes with flags displaying the khalsa (the company of fully initiated Sikhs) symbol prominently honking their way through an otherwise quiet town. As shabad (hymns) reverberated, visitors kept walking in and out of the numerous gurdwaras as revered Nihang or Guru’s beloved knights roamed the streets; bhang (a traditional intoxicating plant) grew in abundance along the roads; streets were lined with people selling clothing, weapons, religious objects, holy CDs and books.

“Now it’s about mock fights,” explains Sodhi Vikram Singh, chairperson of the Anandpur Sahib Heritage Foundation. “The festivities begin a month earlier from Harminder Sahib [the Golden Temple in Amritsar]and end at Takht Shri Damdama Sahib in Bhatinda on Baisakhi [in April].” Born in the sacred town in a 350 year-old haveli, Singh’s ancestral lineage can be traced to the fourth guru, Guru Ram Das.

Considered the Mecca of gurdwaras, Anandpur Sahib is also the place where the khalsa was formed. It is home to one of the power spots: Takht Keshgarh Sahib. The brotherhood of the pure or khalsa was formed on 30 March 1699 by Guru Gobind Singh. The khalsa was then responsible for all executive, military and civil authorities in the Sikh community.

Telling us more about the celebrations, Singh says, “The Sikhs believe in looking after each other. For setting up community kitchens for three days here, people start preparing months in advance and come from villages in their trucks and tractors.” What saddens him, however, is that people only come during these three days. “Through the foundation, I wish to make this town live stronger, forever and add to the economy. For getting people into the town, we organised the first-ever Sodhi Kishan Singh Memorial Arena Polo Competition this year. We arranged accommodation in luxury tents around the canal, which is an idyllic spot.”

A polo player of international repute, 58 year-old Singh brought six players and two teams—British Airways and Hyatt Regency—and a new sport to the town. The Anandpur Sahib Sports Club UK organised wrestling and kabaddi matches. “During my childhood, Hola Mohalla was a 10-day affair, slowly it became a five-day festival and now the festivities have shrunk to three days. My desire is to see the festival grow back to its 10-day celebrations. We also have plans of encouraging local crafts,” Singh says with hope. 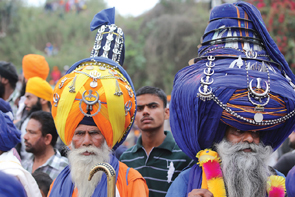 Pointing out the men dressed in blue robes with their embellished saffron and blue turbans, swords hanging by their side, Singh tells us that the Nihang made their own iron utensils. Different regional teams displayed their expertise in martial arts. The Nihang wore magnificent turbans embellished with the khalsa symbol and steel finery. For instance, Jathedar Balbir Singh Chakarvarty, a 70 year-old from Patiala, wore a turban weighing 57 kg that had 750 m of cloth.

The crowning glory of the festival was the culmination of the walk at the Charan Ganga stadium where thousands thronged to watch the camps participate in sword-fighting, tent-pegging and bareback horse-riding. The procession, which began from Keshgarh Sahib Gurdwara, came in with elephants, camels, horses and jeeps. The Nihang were the brightest stars of the martial show as their followers cheered. Small groups involved in mock battles stopped as the horses entered. A line was cleared for the riders to show their skills—a young Nihang stood tall, riding three horses at the same time! As the horses slowed down, the show came to an end and the crowds turned home. Till next year!